What God Does When You Lose Something
By Z Zoccolante

Once upon a time, which is this time, I have a dog named Vega, who I learn a lot of lesson from. Or maybe God just uses her to remind me of things He wants to say.

Last week, after a long day, my roommates take Vega to the park so I can eat dinner. They return telling me that they’re so sorry but they lost her orange ball somewhere in the grassy knoll. It’s fine, I say, it’s just a ball.

The next day I search through all the tall grass, but no orange ball. In essence, I let it go knowing that whoever finds it can now enjoy it with their dog.

A few days later, while I’m doggie sitting another dog, they’re both running around the grassy knoll. I’m listening to music and processing something sitting with my back against a concrete wall. One of the dogs is jumping and running back and forth along the wall, and jumping, and jumping. She’s jumping to where she’s trying to peek her head above the wall to the tiny area overgrown with cacti near the neighboring house.

So, I get up and search through the bushes in the direction of her jumping head. And then I see it.

Behind the bushes glowing in the sunlight is the orange ball. AND about six inches from it to the left is another bright yellow ball.

I remove both of them from the bushes to the dog’s delight. And then I think, ok God, I get it.

God reminds me of the ways in which he takes care of me. God reminds me that when things are lost or taken from me, that He will always show up to provide me something better, in abundance.

God reminds me He’s got my back. 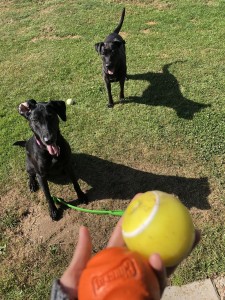