The day passed in strange silence, after people hung their heads, and the body was lowered into the ground.

We said the prayers, but uncertainty hung in the air like frosting pressing against our lips as we tread under the gray sky. It held back its tears so as not to draw attention from our moment. Later that evening it poured. Water slid down the windowpanes. I pictured him holding the hose as the water smeared against the glass, the shape of him blurring in the backdrop.

I always loved the rain, craved it deep in my bones, summoning it from the four corners of the earth. It made everything better, cleared away the past giving start to something new, washing it down the drain gravity pulling it into the dirt, down deep into the earth where it holds it, cleanses it, makes it new.

A life is hard to define. All the edges blur. Each person is made up highways of intersecting paths, some parallel some divergent. We can follow a life, choosing one thread, choosing to see the person in relation to that one thing, arriving at a truth, which should not negate all the other truths. It’s a matter of perception. Which path will we choose as the one from which to construct their life? Using that as the foreground and all else as the background, a life begins to take shape. But it’s only the focal point, the decision of what we chose to focus on. Like a painting. What if instead of focusing on the two lovers having a picnic at the park, the painter drew focus instead to the lone child playing with the kite, his tiny fingers caught in the strings. How would that shift of focus, adjust the feeling of the piece? What different emotion could it evoke?

All the threads, all the colors thrown together, woven through. We paint a snapshot in time, but how can we paint a life. We must always be choosing one path, one thread, one vantage point from the park from which to see the world. We can only be in one place at a time.

Time is strange like that. It moves in a linear fashion, unless we bend the rules. It moves forward like each step I take through the house, from the bedroom, to the living room, to the kitchen. The house is silent in his absence with no lines to truncate time. With no punctuation, it unfolds like a lily on the water expanding through the room. Time is now something I make up. I follow a clock that only I watch as the hands dance only for me. If I put something on the counter it stays there as though the bottom were made of concrete. Until I move it and realize permanency was just an illusion. I get lost in other worlds of the television or the Internet.

No one stops me, tells me it’s getting late, tells me I should brush my teeth and curl into bed. I eat chocolate chip cookies after midnight. I walk around my house whispering prayers following the trails of clothing like stepping stones, like breadcrumbs tossed through the living room. A long winter coat, gloves inside out, one lonely sock, the shirt I’ve worn for days, a bundled up towel, black shoes kissing at the toes. They lie there till I move them. I could grow a forest of things decorated with slippery moss, covering ancient ruins.

So much depends upon the very last moment, the one that started it all, upon the seemingly insignificant detail, the stroke of genius that used to wake him at 2am, the lifeless clothing like a ghost has exited the room. I’m exhausted but something in me doesn’t like to sleep. It awakens my veins late at night when the world is a feather breath of silence and the moon slivers between the cracks in the blinds, white light against the floor. I resist sleep like it’s a death, but eventually it gets us all.

When I finally give in, it pulls me by my feet, drags my vapid body down the stairs as I fold unrealistically in an out of the creases of the steps, like putty, like wax, like I have no bones and I am melting. At the bottom of the stairs the water starts. I want to dip my toe but instead I fall down into the abyss of dreams, strange and unnerving where I dream of eels swimming in and out of my body.

When I wake I am tangled in the sheets as if I were at war with them. I am equidistant from both sides of the bed the same way I slept that one time he left me and I didn’t know if he would return, and I didn’t know what path to choose. So I slept in the middle of the bed fearing either side, fearing to nudge in either direction. I didn’t dare propel motion. The middle felt safe.

He returned and we never spoke of his absence. Decades of a wonderful life followed. We had them together, him on one side of the bed, me on the other. Only now do I find myself once again treading this territory, the place that inhabited the watery abyss. Perhaps I think that I can stop time, that I can change the hands that dance to please me. That I can unwind the levers, call upon the four corners of the earth and make it rain. And instead of erasing time, the memories the earth remembers will stretch their fingers upwards, sifting through stone and distance, and will form the stems of something new, and green, and growing. 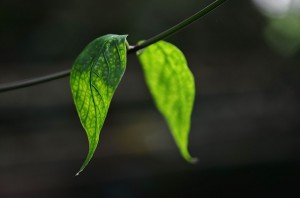