Once Upon a Time I Met a Boy
By Z Zoccolante

Once upon a time I met a boy. I slid a note under his door inviting him to go watch the stars. He thought it was an innuendo. He ignored me. I could tell he wasn’t happy and my life had fallen partially apart so I thought maybe we could laugh together and find some happiness in the space between. He didn’t trust me. I told him I wanted to be only friends and I wouldn’t mess with him or cross that line. He’d never had a girl that was just a friend before. He played computer games while I drew on pieces of paper with crayons and hung them on his walls. He pretended he hated them but I watched tiny smiles ebb and fade against his lips. Hey friend, I’d say. Get the fuck out of my room, he’d say. What, I’d say, you’re super happy to see me too. Yes, my day was alright thanks for asking. He told me stories of his childhood and I realized why he tried to hard to protect himself. He poked at me with invisible needles that sometimes felt like they went all the way through, my breath in inhale, like a rabbit speared in mid frolic jump. My world was crumbling and crashing like the sea. He was not made of life rafts or buoyancy, but it was nice to have something other than my thoughts. He was made of air and icicles, of a warm flame he kept buried in his ribs. Being friends was like inviting a wild animal near the fire, with a soft underbelly and unpredictable claws. Sometimes he was fire and somedays I was too raw from the hours of the day having peeled back my outer layer leaving me without armor. And the shadow voice said, Lash out. Go for the juglar. Tear back with your claws. Protect yourself with violence and blood and all the cruel darkness that lives inside the shadow of your breath. Thank you for showing me the places in me that needed healing, I’d think watching candles dance against my window at night. Friendships are weird and made of air and stars. Some are only meant for a season, like dandelion tendrils floating away on a gush of wind. As a kid I used to climb to my roof at night and talk to the stars. He said he did the same, thousands of miles away from me. And I wondered how many others kids were like us watching the same sky, wondering what we were here for in the darkness, wishing on pinpricks of light, awaiting shooting stars.

Once upon a time I met a boy. I ignored him because I didn’t care, but I ignored everyone then because I was insecure, shy, and in my addiction. So I became the magical unicorn he had to have. He won me over with the way he’d blush under his eyes, the way he’d take my hand or lay his head in my lap, smelling of cigarettes and cologne. In him I saw my darkness. We were stupid little kids. He was like electricity, like the first spark when everything comes alive, right before all the power goes out in the house. He twisted me up inside. He once said, why can’t we just be kids in love. I thought and never said, because you complicate everything. In my mind I can remember how magnetic he felt, like being pulled towards something I’d never known. He told me he was a train and to hold on as long as I could. Until I let go. I can still see his eyes and remember how much I wanted to slide into his skin the second he showed up on my doorstep. We were just kids and I learned to stay away from fire. I learned that everyone has their own darkness but it’s our own to carry.

Once upon a time I met a girl. Her mother once told her that she should be careful of me because she thought her daughter was easily influenced. She had no idea her daughter was the one who held a captive audience of one. She was like wind through the trees, open mouthed laughter, the goodness of people, the small moments and details. I ditched class to drive around a city she knew like the back of her hands. She took me on adventures. When it rained she brought me to Korea town and showed me her favorite place to eat soup. She said it tasted better in the rain. She used to thank people by name and that’s how I got the habit of looking at people’s name tags, of looking at people. We’d drive and end up at 2am at a restaurant that served pancakes that tasted like cupcakes. Everything felt magical with her as though we were on some epic adventure where time laid out like a carpet for us. When I went home everything reminded me of her and I thought, do I love this girl? No, that’s not allowed. All I know is I wanted to be close to her, wanted to live in her words and her stories, and our laughter. Once I made her a journal and in the first two pages I wrote everything I knew about her. She told me later that not even her fiancé knew half that stuff about her. I was confused, but really it was because I paid attention. I appreciated her like one would be in awe of a butterfly with neon colored wings. She was light as a feather and would brush off anything dark. She might have been the light side of my star. It’s strange how people grow apart, without malice, with peaceful intent, without even making it a thing. It just happens and it makes sense though if you’re both rooted but one on side of the planet, and one on the other.

Once upon a time I met a boy. He was golden from the summer sun. In him I saw everything I ever hoped for or thought I could be. It felt as though we were moving on the same slip and slide, laughing out loud in wonderment of who we’d stumbled upon. I was the noncommittal type but there was only the slip and slide and everything aligned. He was the smell of rain, laugher lingering in my bones, liquid sunlight, and bare feet in the grass. He was the one I called home, the one who loved me in the storm, held the door open screaming my name and wouldn’t close it until I was safe inside. He taught me about sacrifice. With him I learned how to stay because maybe I’ve had lifetimes of running and I’m good at that. But staying was hard. He taught me love and the kindness of a pure heart. There was no one I respected more. But love is like a kite that has a sky full of choice and sometimes the string snaps when we’re not paying attention. Sometimes the thing you most love in the world is caught up in the sky and you feel your heart collapsing into itself when you realize you can still see it but it’s gone. And there is only surrender as you watch it venture where you cannot go. There is only surrender, the joy to remember, and the words thank you.

Once upon a time I met a girl. She was glitter and wild. She was a field of sunflowers dancing through the forest, swimming naked in moonlight. She was the first friend I was completely honest with about the things that shamed me. She once wrote in my journal when I was sleeping. It took a whole page, “I love you. Period.” We wandered through the world in a bubble of our own making full of fairy dust, flowers, and feathers. We drew people towards us like siren in the water. But we danced away like hopping from lily pad to lily pad, laughing all the while. We told each other the real shit and laughed and cried out our hearts. When I was going through a tough time, she once told me to pick a place, anywhere in the world and she’d move with me. She taught me about generosity about giving with deep trust it would return somehow somewhere. And it always does. She taught me to love people for who they are and to just let them be in their dance.

Once upon a time I met a boy and I thought that we could have so much fun. He held his hands in his pockets and we made up stories and for the first time in a while I didn’t want to leave even though I was shivering cold. When he touched my cheek I blushed and no one makes me blush except for my crush in 9thgrade. I was thinking we could play. I was hoping we could be magic. When he kissed me it felt like warm mercury slipping into my veins and I wanted to kiss him for an hour on the sidewalk as though there was nothing else. With him I tried to be my better self. But I was new at it and we humans don’t do anything perfectly. We fumbled along this weird little path. We missed each other often along the trail. I thought, why can’t we just be kids in love and laughed with a string of sadness. People are simple. People are complicated. We do our best. In him I felt a familiar darkness and a brilliant light. He was the sound of the ocean at night crashing on the shore, of sunrise in the distance, miles of open road, and hands I craved all over me painting me with music. He felt like a rollercoaster in the dark, the one at Disneyland with stars flying past, with flips and turns, abrupt stops and starts. He taught me of hope and expectation and to firmly root myself in me. He taught me that you, or your love, can be misunderstood, that not everyone will see you but it’s ok to keep your heart open. It’s ok to leave. That loving someone isn’t weakness even if they don’t love you back. He taught me that people can care enough to hurt you just enough to keep you away. And that too is a weird little gift. I grew so much in so many ways. I know who I am and I love me. Sometimes the things that never were pull at us because they feel incomplete, but maybe they are imperfectly perfect as they are, exactly the way they were always meant to be. We can be ourselves.

Once upon a time I met a girl. She taught me the word Namaste. She said it meant: 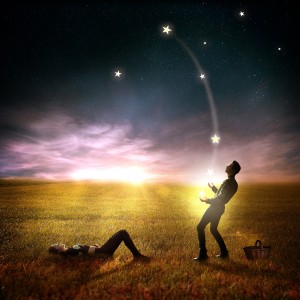